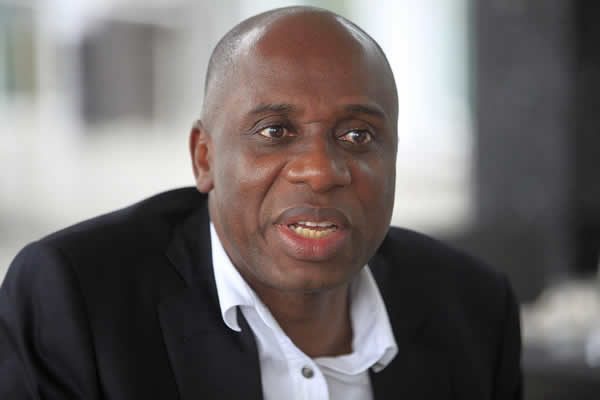 Minister of Transportation and a former Rivers State Governor, Rotimi Amaechi has declared his support for Awara Biokpomabo, the governorship candidate of the African Action Congress (AAC).

It is no longer news that the All Progressives Congress, APC will not be fielding any candidate for elections in the state, following an order by the Independent National Electoral Commission,INEC backed by an appeal court judgement.

Amaechi therefore tasked APC members and supporters in the state to come out en masse on Saturday and vote for Biokpomabo.

Speaking on Wednesday morning in Eleme, Eleme LGA of Rivers state, Amaechi said though the APC was in court over the exclusion of its governorship candidate, Pastor Tonye Cole by INEC, APC supporters should vote the AAC candidate.

His words: “This morning, the leadership of the party met and agreed that we would work with a party called African Action Congress (AAC), while we are still in court to reclaim our mandate.

“So, on Saturday (March 9), we will vote for AAC. You must go home and vote for AAC. There should be no excuse not to vote, because there will be security for everybody. You must prepare and make sure you win the governorship election.”

The transportation minister also enjoined Rivers people to massively vote for the AAC’s candidate, stressing that there were numerous benefits they would derive from the government.

He said: “The moment the governorship election is won by AAC’s candidate this Saturday and the new governor is inaugurated on May 29, 2019, by June this year; there will be local government’s chairmanship and councillorship elections.

‘So, you should all go out and vote and make sure that you are not rigged out.”