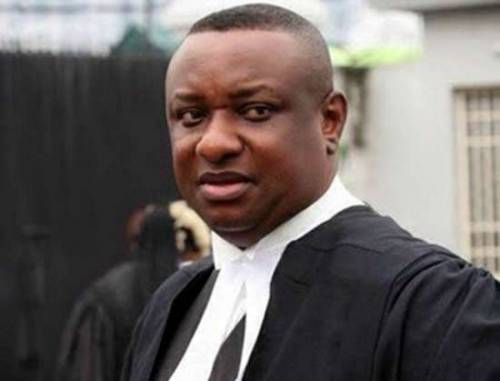 Nigerians have taken to social media to “roast ” Festus Keyamo, a Senior Advocate of Nigeria(SAN) and campaign spokesperson of President Muhammadu Buhari, over an alleged bribery scandal.

Keyamo, who has been a forerunner of the anti-corruption campaign of the present administration and a former prosecutor at the Economic and Financial Crimes Commission, EFCC, has been indicted in bribery scandal, where he is reportedly the bribe giver.

It was revealed by Deji Adeyanju, a co- convener of the “our mumu don do” campaign” against President Buhari’s government, alongside Charles Oputa aka Charly Boy aka Area fada, that he(Charly boy) received bribe in millions from Keyamo, to stop his campaign against Buhari, and slander Atiku Abubakar , the presidential candidate of the Peoples Democratic Party, PDP – while Adeyanju was in prison.

Adeyanju upon releasing an audio recording of Charly Boy’s alleged confession to taking bribe from Keyamo, has whipped up a storm on social Media.

Take a look at what Nigerians are saying

5-We know Festus (Stephanie Otobo) @FKeyamo to be gutter born, gutter raised and gutter destined (unless he changes). But you, @Areafada1, were born to a honourable man/family. No matter how much money gutter gives you, you shouldn’t stoop to collect it! #CharlyBoyOrCharlyCheap

That's a former efcc lawyer fighting kwaruption with Mr integrity. No wonder we now has Mr bullion vans around town all fighting kwaruption. If you listen to Festus on national TV, you'll easily notice that he has been TRADERMONIZED & BULLIONVANIZED! Shame!! https://t.co/PnRHbSUtO1

Festus Keyamo sings anti corruption even in his sleep.

But he is the one who distributes corruption fund everywhere.

BMC waxing all lyrical about lawyers and judges giving bribes and all, turns out their own SAN Festus Keyamo is a front runner in bribes dispensation. Silence noted.