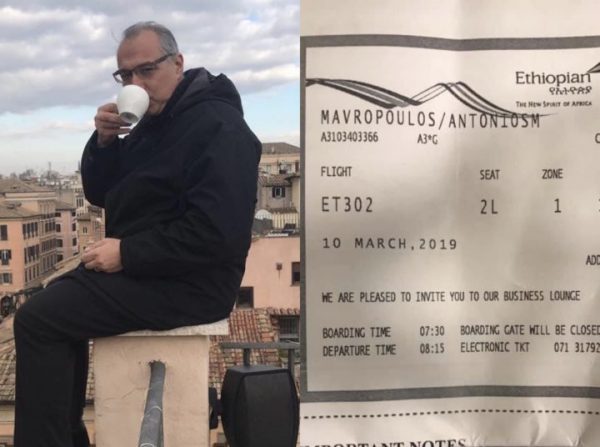 A man who missed the ill-fated Ethiopian flight that claimed the lives of many have taken to Facebook to share an emotional post on how his life was saved.

According to the man, who goes by the name Antonis Mavropoulos, he had arrived at the airport late for the flight headed to Addis Ababa.

In a post titled “My Lucky Day,” and written in Greek, Antonis, shared a photo of his boarding pass and wrote; 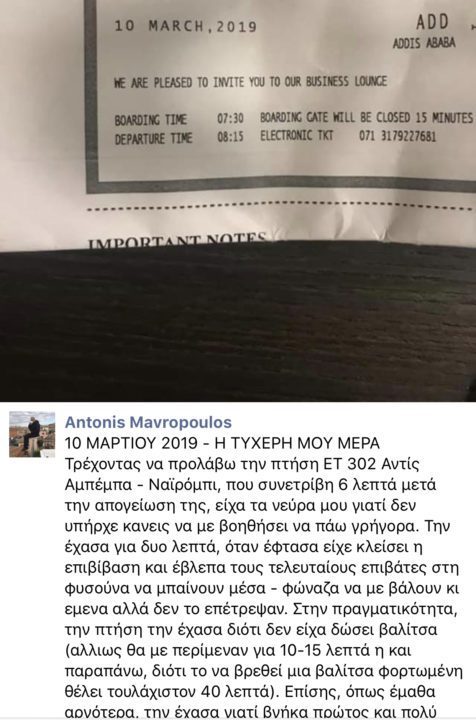 March 10, 2019-my lucky day
Running to catch flight et 302 Addis Ababa – Nairobi, which crashed 6 minutes after taking off, I had my nerves because there was no one to help me go fast. I lost it for two minutes, when I arrived, the boarding was closed and I watched the last passengers in tunnel go in – I screamed to put me in but they didn’t allow it. In fact, the flight lost it because I didn’t give a suitcase (otherwise they would expect me for 10-15 minutes or more, because finding a suitcase loaded wants at least 40 minutes). Also, as I learned later, I lost her because I came out first and very quickly from the plane and the connection ambassador who came to receive me didn’t find me

Airport people, kind, promoted me to the next flight that would leave at 11:20, they apologized for the inconvenience and transferred me to a nice lounge for the-waiting.

On 10:50, as we joined the next flight, two security officers informed me that for security reasons that a senior officer will explain to me, they will not allow my boarding. In my intense protests they left no margin of discussion and led me to their superior, to the airport police department.

He told me gently not to protest and say thank you to God, because I am the only passenger who did not enter the flight et 302 which is missing. And that this was why they can’t let me go, until I determine who I am, because I didn’t get on the flight and everything. At First I thought he was lying, but his style left no margin of doubt.

I felt the ground lost under my feet, but I came back in 1-2 seconds because I thought something else would happen, some communication problem maybe. People were kind, they asked that they had to ask, they my elements and let me wait.

They made me sit in a living room and they told me to wait there until they warn me.

I was looking on the internet to find elements for the flight, friends from Nairobi informed me that 30 minutes after the expected time had not landed and there was no information about her luck and suddenly all the wifi of the airport.

Fortunately there are sms – from close friend I learned that the flight crashed almost just took off and that the issue was going out in the Greek media.

Then I realized that I must immediately contact my own people and tell them that I was not in and that for two small random circumstances I lost the flight – the moment I made that thought i collapsed because then exactly I realized how lucky I stood.

This text I wrote to manage my shock. I’m posting it because I want to tell everyone that the invisible and, nēmatídia of fortune, the out-of-plan circumstances knit the web in which our life is taken. It’s millions of small threads we almost never feel – but one to break is enough to feed the whole web instantly.

Really, it’s the first time I’m so glad I wrote a post and I’m grateful to live and that I have so many friends that made me feel their love – kisses to all and a warm thank you for your touching support. Special citation reference for early surgery and support to Jeroen Par Dijk Panos Fragiadakis Haris Kamariotakis and a big sorry to my family for the shock you’ve been looking for.

(the post went up from Nairobi to which I finally arrived)