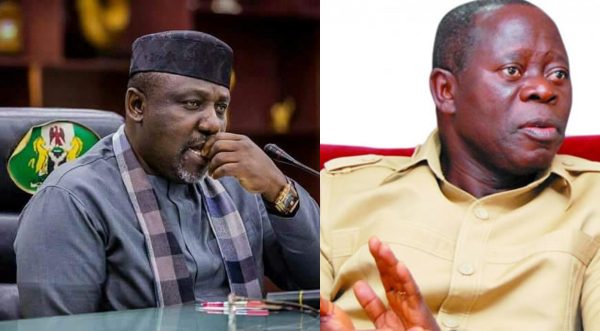 Imo State Governor, Rochas Okorocha, has launched a scathing attack on the All Progressive Congress(APC) National Chairman, Adams Oshiomole, following his suspension from the party. He was suspended over anti-party activities alongside his Ogun State counterpart, Governor Ibikunle Amosun.

According to a statement he released through his Spokesman, Sam Onwuemeodo, He accused Oshiomole of plotting to destroy APC in the South East zone.

“Adams Oshiomhole was determined right from the outset to destroy APC in the south-east and unknown to party chieftains from the zone who had genuinely supported his chairmanship.

“He is playing the politics of 2023 in 2019 and in playing it he has thrown caution to the wind. In all the south-east states, there are crises and all arising from the fraudulent manner he conducted the primaries.

“In 2015, Governor Okorocha had joined the merger that gave birth to APC at the risk of his second tenure and was called all sorts of unprintable names.

“Yet, he won the governorship election, delivered 24 out of the 27 members of the House of Assembly for APC, two House of Representatives members and one Senator.

“In 2019, Oshiomhole felt that such a man should be treated with disdain. He handed over the governorship ticket of the Party to Hope Uzodinma who has never resigned his membership of the PDP on the floor of the Senate like others did and giving all kinds of flimsy excuses.

“And if Oshiomhole had meant well for APC and Imo people in particular, would he have given the ticket of the Party to a man facing five corruption charges and having travel ban slammed on him, to be the party’s Candidate?”

Okorocha berated the national chairman for his “lack of wisdom” while alleging that Oshiomhole was trying to fulfill his own end of a deal that involved giving out the party’s ticket to “non-deserving elements.”

“In the February 23, 2019 Presidential and National Assembly election, Governor Okorocha won in ten, out of the twelve local government areas in Orlu zone to emerge winner for Imo West Senatorial District,” he said.

“And when the APC members across the nation are still celebrating the success of the party in the Presidential and National Assembly elections, Oshiomhole in his wisdom or lack of it, felt that the best action in the circumstance was to suspend two governors who did well in the election, even when he played safe in 2015 and 2019 in Edo State without any known pressure.

“Again, Oshiomhole coming with the purported expulsion this time was only acting out of the fear that God in his infinite Mercy could give Governor Okorocha a role to play in the Senate, in the overall interest of the nation.

“The truth is that Oshiomhole is only labouring in vain to play his own part of the deal that warranted his giving out the tickets of the party to non-deserving elements like in the case of Imo. Finally, APC especially in the Southeast and in Imo in particular will outlive Oshiomhole.”