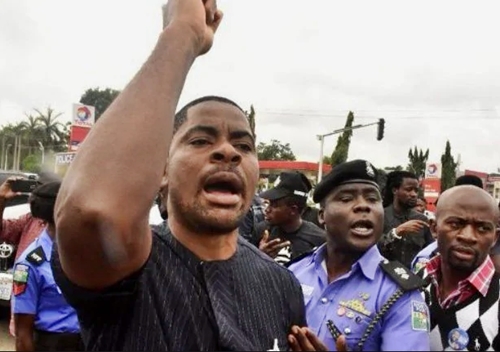 Political activist, Deji Adeyanju, who recently regained his freedom, after spending over 60 days in a Kano prison, came out to discover that his co, “our mumu don do” convener, Charles Oputa aka Area fada or Charly Boy, had compromised.

In a statement on Wednesday, Adeyanju reveals his disappointment upon discovering that his colleague in the struggle, had accepted money from President Muhammadu Buhari’s campaign spokesperson, Festus Keyamo, to attack Atiku Abubakar.

I didn’t want to respond or ever say a word about my withdrawal from Our Mumu Don Do but going through this vanguard report, I must now clear the air.

Charly Boy is the number one Mumu in Nigeria.

He compromised by collecting money from the government while i was locked up in prison by the oppressors. He collected money from them to do a video against the main opposition candidate -Atiku and also to stop attacking Buhari.

When I confronted him -Charly Boy with the evidence, he confessed to collecting money from them but said he didn’t collect the money to do a video against Atiku but they gave him the money as support. I dare him to deny this allegation.

I have the recording of his confession.

Imagine after all the sacrifices, someone will just be going around collecting money in the name of the movement. Huge disappointment. A fraud.

The stories are just too many.

Imagine after all the sacrifices, someone will just be going round collecting money in the name of the movement. Huge disappointment. A fraud.

The stories are just too many. pic.twitter.com/TQiPB6e7zc