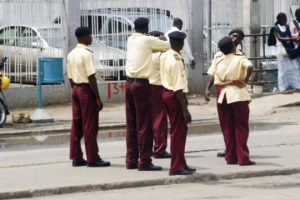 It was a scene to behold early this morning in Ogba area of Lagos as a Lagos State Traffic Management Authority(LASTMA) staff and a bus driver engaged in a dirty fight.

While what actually caused the fight is unknown as at the time of this report, the Lastma official was the first to land a heavy punch on the driver.