Senator Abiola Ajimobi, the incumbent governor of Oyo State, has urged the nine elected members of the House of Representatives on the platform of the All Progressives Congress (APC) in Oyo State, to support Femi Gbajabiamila (APC, Lagos) for speaker in the 9th Assembly.

Governor Ajimobi made this requesting while hosting the lawmakers-elect in Ibadan on Sunday. Governor Ajimobi urged them to tow party line and follow the decision of the APC leadership in determining the presiding officers of the incoming 9th Assembly.

“You should toe the party line by following the decision reached by the APC leadership in determining the leaders of the 9th Assembly.

“Hence, you should support the aspirations of Femi Gbajabiamila as the next Speaker of the Federal House of Representatives,” Ajimobi admonished the lawmakers.

He pledged loyalty to the party’s decision, promising to “abide by its decision on the choice of Gbajabiamila as the Speaker of the 9th House.” 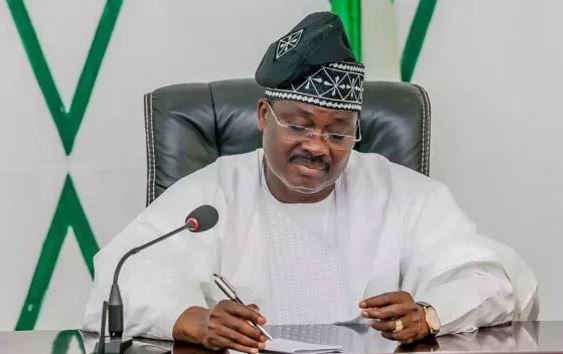 Also Read: I Didn’t Collect Salary For The 8-Years I Was Osun State Governor – Aregbeshola