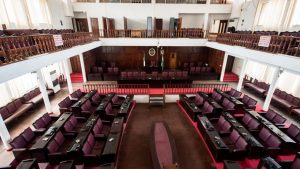 The Bayelsa state chapter of the All Progressive Congress(APC) has frowned at a proposed bill by the state house of assembly member seeking to pay them a pension for life.
According to the state APC public secretary, Doife Buokoribo, he said such bill shows that the state lawmakers feel no concern for the feelings of their suffering constituents.
His words:

“We have learned of a planned law being pushed by the House of Assembly prescribing monthly post-service life pension of between N0.1 million and N0.5 million for members of the House.

“The party has also observed how the strange idea, which was proposed as a bill and passed by the House on Wednesday, has set the public pulse racing.

The party also said it was unsympathetic for members of the House of Assembly to seek to enhance their own lives at the expense of the vast majority of Bayelsan people living in pain and penury.

It, therefore, advised the legislature to withdraw the obnoxious pension bill and avoid the appalling crime against the people of Bayelsa State.

“In the event of the legislature’s refusal to heed this solemn advice, we appeal to Governor Seriake Dickson, if he is still in touch with his essential humanity, to refuse assent to the pension bill when it is transmitted to him,”  he submitted.