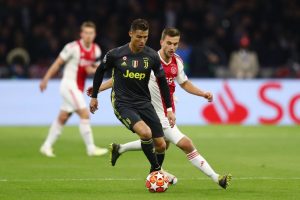 Five times Ballon d’Or winner, Cristiano Ronaldo, has now become the joint highest goal scorer of the champions league goal at the Johan Cruijff Arena after his solitary goal against Ajax ensure a share of the spoil during the meeting between the two sides today.

He is now leveled on six goals with Zlatan Ibrahimovic, a former Ajax player.