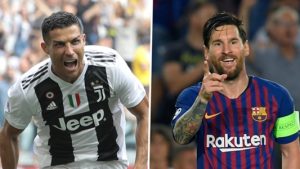 Five-time Ballon d’Or winner, Cristiano Ronaldo, has now become the first active player in the history of football to score 600 career goals after his goal against Inter Milan prevented them from defeat.

His eternal rival, Lionel Messi, is just on 567 goals after his goal against Levante today confirmed his team, Barcelona, as the Spanish champions.