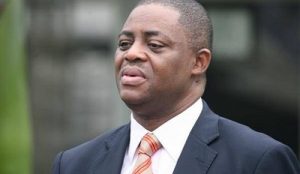 A Former Minister For Aviation, Femi Fani Kayode, has shared the prophecies that were shared with him by a popular prophet, Temitope Joshua, of the Synagogue Church of All Nations.

The Peoples Democratic Party(PDP) chieftain who made this revelation through his Twitter handle shared that all the prophecies came into pass as shared by the highly respected prophet.

He said he predicted about Zimbabwe, Algeria, Sudan, Korea, and North Korea, adding that to the Glory of God, they all came into manifestation.

Two years ago Prophet T.B. Joshua told me that there would be many changes in African politics within a matter of 3 years.He said Bouteflika of Algeria, Mugabe of Zimbabwe and Al Bashir of the Sudan would either step down or be removed from office.He also said there would be..

…no war on the Korean peninsular and that there would be peace between America and S. Korea on the one hand and N. Korea on the other.2 years later every single one of these prophecies has come to pass and I am utterly amazed.Praise God for honoring the words of His servant.