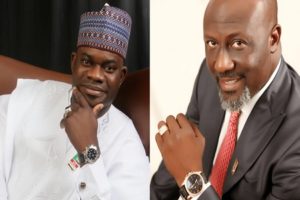 The member representing Kogi West senatorial district in the National Assembly, Dino Melaye, has cried out about the plan of the state governor, Yahaya Bello, to borrow 32billion naira from Sterling Bank.

Dino who spoke through his Twitter handle concluded that Kogi state has been put up for sale as soon as the governor came up with the plan to borrow the money.

He, however, added that the people of the state would go to court if the bank makes the mistake of borrowing him the money.

Kogi State 4 sale soon as Yahaya Bello has concluded plans to borrow 32billion naira from Sterling Bank. If Sterling Bank make the mistake of giving Akotileta this money. We will go to court bc there is no compliance with our extant laws. The Bank should expect massive protest.