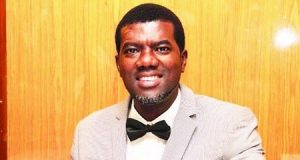 Reno Omokri, a former aide to ex-president Goodluck Ebele Jonathan, has mocked the national leader of the ruling All Progressive Congress(APC), Asiwaju Bola Ahmed Tinubu, after the former secretary general of the federation, Babachir Lawal, shared that there is no guarantee that Vice-President Yemi Osinbajo would be given the party’s ticket in 2023.

Reno while reacting through his Twitter handle shared that the northerners only waited for Tinubu to convince his people in the southwest to vote Buhari before landing him the major blow.

I like Junaid Mohammed and Babachir Lawal. They just waited for Bola @AsiwajuTinubu to convince his people to vote for the munafiq called @MBuhari and today, at different occasions, they both unleashed their bombshell-SOUTH SHOULD FORGET ABOUT 2023. I am laughing #NextlevelRegret