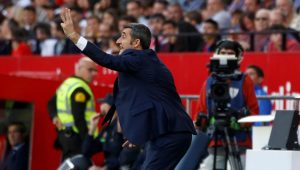 Following Barcelona’s one-nil win over Manchester United at Old Trafford in the round of 16 of the UEFA Champions League, Ernesto Valverde has now become the first coach in FC Barcelona’s history to win an official match at Old Trafford.

Other coaches have not been able to achieve a similar feat. All Barcelona’s victory over the Red Devils has come in other stadia except Old Trafford.