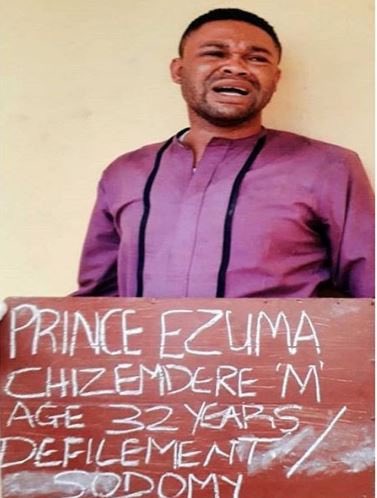 Pastor Chizemdere Ezuma, the founder of Jesus Intervention Household Ministry, Ejigbo, Lagos, has been arrested for allegedly raping underage boys an infecting them with HIV.

Ezuma was nabbed after a police informant told police he was back only three months after he was declared wanted.

The said pastor was said to have hidden in the ceiling of his home for more than two hours when detectives went there to arrest him.

Ezuma met his Waterloo, after an alleged male prostitute, Prince Chinecherem, who was arrested and taken to court for raping a 16-year-old victim, Anthony Ikem – And the victim implicated the pastor and the proustite in his revelation.

Ikem had been caught while sneaking out of the pastor’s home with a bag which had used condoms and other items, and upon interrogation by neighbours, confessed that he was a sex partner of Ezume.

Ikem further confessed that the pastor usually gave them out to some of his male clients including VIPs.

When Ikem was taken to the hospital for checks, he was found to be HIV+.

However, in his statement to the police, the pastor revealed that he always paid the boys N2,000 for sex.

According to a source, “The reverend confirmed he is HIV+ and has been receiving treatment for over three years. So, he knew he was HIV positive and still infected his victims and clients with it,”