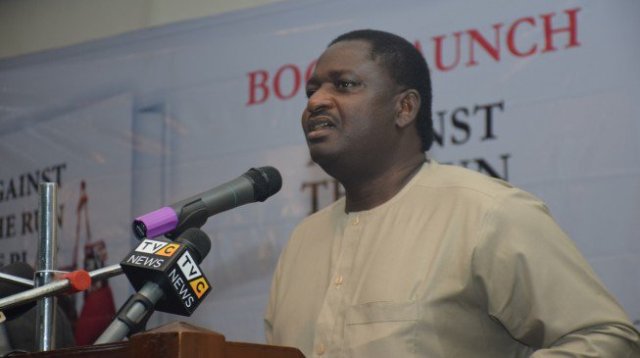 President Muhammadu Buhari’s spokesperson, Femi Adesina has said that Leah Sharibu, the Dapchi girl left behind because she failed to renounce her Christian faith, will be released “one day”.

This was made known on Sunday by Adesina during the Easter concert of the Apostolic Faith, West Africa.

According to him, government was doing all in its power to see that Sharibu returns, so everyone must keep faith.

Sharibu was left behind in Boko Haram captivity, when her colleagues who were kidnapped alongside her from Government Girls Secondary School, Dapchi, Yobe state, on February 19, last year were returned by the terrorists

Adesina said “We believe that Leah will come back one day, a lot is being done, and you know you cannot begin to proclaim sensitive things like that on the pages of the newspaper.”

“Whether killings, economic, political or social problems can be overcome; just as Jesus overcame death, we shall also overcome our troubles; Nigeria will resurrect just as Jesus resurrected.

“We will overcome all the problems facing the country; it’s a time for us to be encouraged, resonate and determined that God still rules in the affairs of men, and Nigeria.”

Buhari’s “Next Level is a consolidation of things that has been done, what is being done that is still pending”, he added.

“Security, reviving the economy, creating jobs and fighting corruption; Next Level is a consolidation of all these things. We will focus more on infrastructure, economy, small and medium scale enterprises,” he said.