Ifu Ennada took a swipe at trolls who came after her after Soso Soberekon sent her N500K. She revealed that the amount isn’t such a big sum. The former BBnaija housemate also disclosed that she was called a ‘small girl with a big god’ after she received the money.

Ifu Ennada further stated that this is not the first time the music executive will be supporting her and her business. She added that if one doesn’t have people who can comfortably gift out such amount without expecting sex in return, then that person needs to work on herself and change her circle.

Caption this… In other news I had to take down my 500k gift post from @sososoberekon cos the begging was too much, some even went to the extent of emailing me to call me Small Girl Big God cos of 500k.😢 Nigerians we can do better.First of all, if you notice that money was sent directly to my business account, not even my personal account that I posted in his comment section. This isn’t the first time Soso will be supporting me in such way, I posted the screnshot and thanked him publicly because it came so fast and I wasn’t even expecting anything since I jokingly commented. Few weeks ago I thanked Soso publicly here for always supporting me, what do you think that was for? 500k isn’t such a big sum…if you don’t have people who can comfortably gift you 500k without expecting you to open your legs then you need to work on yourself and change your circle. 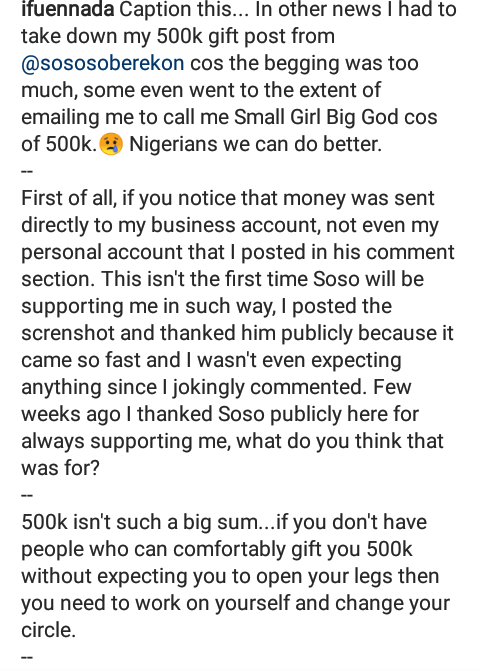 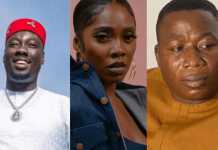