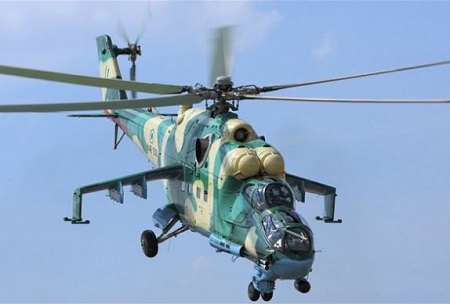 The Nigerian Air Force has said it has launched air strikes on 8 camps of armed bandits in Zamfara state, killing many of the criminals.

According to the NAF, those who were lucky to have survived, are being chased by ground troops up to the border towns between Nigeria and neighboring Niger Republic.

This was made known by Air Force spokesperson, Air Commodore Ibikunle Daramola in a statement on Wednesday.

The statement which had attached a video clip, revealed that the operations took place in Sububu, Rugu, Doumborou and Kagara forests.

“The Air Task Force (ATF) for Operation DIRAN MIKIYA has continued to record successes in its renewed air offensive against armed bandits in Zamfara State and its environs.

” The air strikes, which were intensified on 8 April 2019 with the deployment of additional aircraft, are aimed at flushing out the bandits from their hideouts in Sububu, Rugu and Kagara Forests, amongst others, whilst ensuring the protection of the lives and properties of citizens in the Northwest of the Country.

“On the first day of the intensive operation, the ATF conducted coordinated air raids against multiple identified armed bandits’ hideouts at Doumborou, Sububu, West Malamawa, Baturia Pond and Rugu Forest, where several bandits were neutralized and their camps destroyed.

” Yesterday, 9 April 2019, the ATF conducted waves of attacks against several targets. The first wave struck 3 armed bandits locations within Sububu Forest as well as another camp in Kagara Forest.

” Targets attacked in the second wave were notable armed bandits’ hideouts at Kamarawa, Kunduma and Tsamare Hill, while the third wave focused on armed bandits hideouts in Doumborou.

“The ATF also provided close air support‪ to surface forces of Sector 2 to enable them move into the attacked areas to mop-up the fleeing survivors and recover their weapons. ‬

“In all, the ATF degraded 8 camps and neutralized scores of armed bandits.

” ‪Reports indicate that, ‬as a result of the air strikes, ‪some of the bandits are fleeing towards the border ‬between Nigeria and Niger Republic‪.

“Accordingly, the ATF is liaising with relevant authorities to ensure that the bandits are prevented from escaping through the Southern part of Niger Republic.‬

“The NAF, in consonance with surface forces and other relevant authorities, will sustain its efforts to end the scourge of banditry and other related threats to life and safety in the Northwest of our dear nation. “