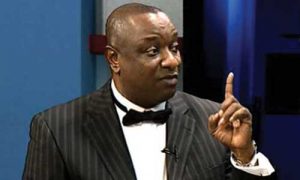 Nigerians have taken to their Twitter handle to fire heavy shots at President Muhammadu Buhari’s campaign spokesman, Festus Keyamo(SAN), over a comment he shared via his Twitter handle on Wednesday, 17th April, that Buhari is a friend of the poor and the nightmare of PDP since 2003.

The nightmare of PDP since 2003! The demystifier of old power-blocs!
The slayer of the corrupt!
The friend of the poor!
The one the thieves love to hate!
My guy! pic.twitter.com/tIZXTbL0g3

When a lawyer starts talking like a runs-boy, you know something is wrong.

Seeing all the arguments of both APC & INEC over ATIKU will make you understand that APC means, Association Psychiatric Comrades!

How much was fuel before GEJ and were there fuel subsidy before GEJ? Nigeria wasn’t good under GEJ biko