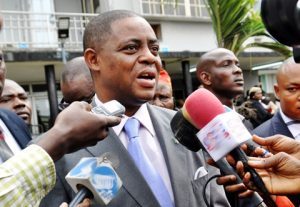 Femi Fani-Kayode,a Peoples Democratic Party,PDP chieftain and former Minister of Aviation, has endorsed an All Progressives Congress, APC, House of Representatives member, Femi Gbajabiamila for speaker of the ninth Assembly.

Gbajabiamila had formally declared his intention to contest for Yakubu Dogara’s present seat in the incoming national assembly on Saturday. It should be noted that he has the support of the APC for the position.

Speaking on Gbajabiamila’s intention to run for Speaker, the former Aviation Minister said he has known him “for 40 years and I can assure you that he will make a great Speaker.”

He notes also that though they disagree politically, it doesn’t change the fact that Gbajabiamila is a good man, representing a great constituency.

His words: I have known Femi Gbajabiamila for 40 years and I can assure you that he will make a great Speaker of the Fed. House of Representatives. We may disagree politically but I must confess that he is a profoundly good man representing a great constituency. I wish him well.