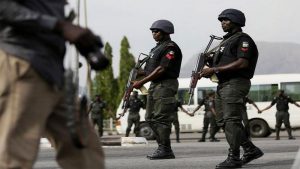 The was palpable tension in Iyana Coker area of Ifo Local Government in Ogun state after some police officers reportedly opened fire, killing one in the process and many others injured.

A 25-year-old man, Akinsanya Akeem, who was reportedly killed in the melee is said to be known in the area as ”Obasanjo.”

According to an eye witness account, the police came to the area to arrest a man but started shooting sporadically into the air after the arrest.

What the witness said:

“They came to our area in a red Mazda 323 around 4:30 p.m. to arrest a man.”They arrested the man, but they started shooting into the air as they were about to drive away from the area.”