April 1, 2019 is the deadline for filing petitions before the election tribunal.

A member of the legal team and Senior Advocate of Nigeria (SAN) Gordy Uche who led others to file the petition says, his clients are challenging the victory and educational qualifications of the governor-elect, Aminu Masari of the All Progressives Congress, (APC).

He also pointed out that more senior lawyers will join the PDP team to challenge the victory of Governor Aminu Masari.

The Deputy Governorship candidate and state chairman of the party, Salisu Majigiri called on the party supporters to be law abiding, thereby urging them to pray for the party to emerge victoriously.

The PDP is challenging the outcome of the governorship elections which produced governor-elect Aminu Masari, of the APC.

Masari and the Independent National Electoral Commission, (INEC), are respondents listed in the petition before the tribunal. 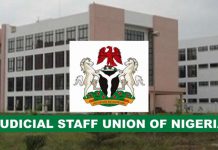