Home National News Shocking: Man Kills Wife Because She Said She Would Re-Marry If He...
Facebook
Twitter
WhatsApp 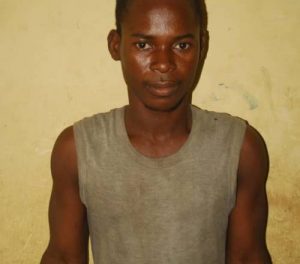 A 30-year-old man, Uwani Danjuma, has confessed to killing his wife because she said she would re-marry if he dies. Danjuma while confessing after being arrested by operaives of the  Niger State Police Command added that she made the comment while he was sick some weeks ago.

The suspect waited till he recuperated before hacking his wife with a matchet.

“I can’t imagine my own wife telling me that if I died, she would remarry.”  “I lost my temper and inflicted injuries on her neck with a machete which led to her death. I am not regretting killing her since she wanted me to die; I killed her so that she will not remarry. She should not have said that to my hearing; there is power in the spoken words, so let her go. Allah will send her to hellfire for that unguarded comment.” He submitted.