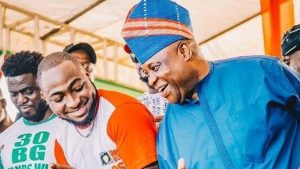 David Adeleke a.k.a Davido has taken to his Twitter handle to launch a heavy attack on Osun state Governor, Gboyega Oyetola, after news filtered in that a lawsuit seeking the disqualification of his uncle, Senator Ademola Adeleke, has been filed at the Federal High Court in Abuja.

Davido in his reaction said ”Oyetola must go” because he lost the gubernatorial election. He further asked him to accept God’s will and vacate the governorship seat before going on to add that he needs to go back to what he is doing.

Ademola Adeleke was the People Democratic Party(PDP) flagbearer during the last gubernatorial poll in Osun state.