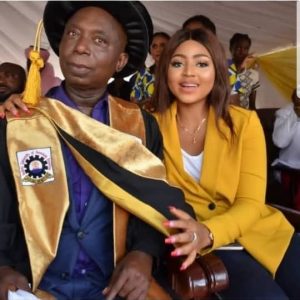 Recall that we reported that teenage Nollywood actress, Regina Daniels,  and ”alleged” husband, Ned Nwoko, made their first public appearance together yesterday, 27th April, when her husband was being presented with an Honorary Doctorate Degree at the Federal University of Petroleum Resources FUPRE, Delta State.

Well, the couple didn’t just end it there as they were spotted dancing while Harrysong performed for them after the award ceremony.