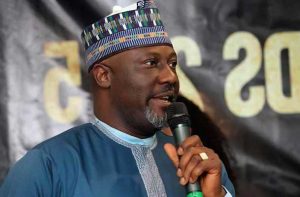 The senator representing Kogi West Senatorial district in the National Assembly, Dino Melaye, was at AY live where he showed off his singing skills.

According to the video which was shared by the highly controversial senator via his Twitter handle, Ayo Makun, beckoned on him to perform one of his songs and he rendered his ”Ajekun Iya” much to the admiration of the teeming crowd.