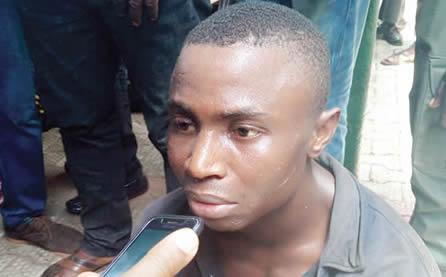 The Anambra state police command has arrested a cult kingpin identified as Chigbo Aniegbu for his alleged involvement in the murder of a former lawmaker in the State.

The ex-lawmaker Frank Igboka, according to the suspect, was killed because he banished cultists from Nimo community.

PUNCH reports that the suspect confessed to the crime while he was being paraded at the Anambra State Police Command’s headquarters on Monday.

The 27-year old suspect, while speaking with newsmen said the late legislator terrorised his gang during his time as President General of Nimo community.

Aniegbu, who is also known as Transformer, speaking further claimed that the deceased vowed he would not allow them back to the community until they change.

Aniegbu, who is a  Vikings cult member, however, said he never fired the shot that killed Igboka adding that he was only asked to join the operation by his gang members but he was not told it would involve taking the life of the man.

Mustapha Dandaura, the state Commissioner of Police, while speaking on the case said three members of the gang were still at large and the police are working tirelessly to get them arrested

The CP ave the names of the fleeing suspects as Chukwunonso, Nwasami and Obinna Okafor and added that the state Governor, Willie Obiano, had increased the cash reward for anyone who catches the killers of the late lawmaker to N15m from N5m.