Although Bobrisky’s forthcoming birthday is three months from now, the popular crossdresser has already announced plans on how he plans to make the day a memorable one. According to the controversial figure, the birthday bash would run for three days consecutively.

He further shared that day 1 would start with an orphanage visit before ending it with the killing of a cow on the same day. The second day would be the real birthday party with the club as after party.

She concluded that the event would end on Sunday with a beach house party. 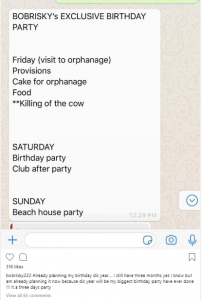