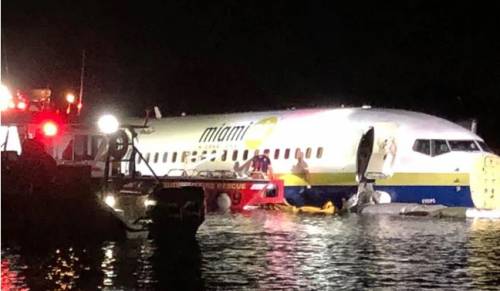 A Boeing jetliner carrying 143 people from Cuba, has reportedly slid off a runway into a shallow river in Jacksonville, Florida. The incident happened on Friday as the pilot tried to land at a military base during a thunderstorm.

NDTV, reports that 21 persons were injured and no fatalities or critical injuries. The Jacksonville Sheriff’s Office said via  Twitter confirmed that all 21 persons injured were taken to a hospital and have been certified to be in good condition.

“The plane was not submerged. Every person is alive and accounted for.”

“No fatalities reported. We are all in this together.”

A passenger on board the plane, attorney Cheryl Bormann, in an interview with CNN said the flight which had been four hours late in departing already, made a “really hard landing.”

“We came down, the plane literally hit the ground and bounced. It was clear the pilot did not have total control of the plane. It bounced again… “terrifying.”

“We were in the water, we couldn’t tell where we were, whether it was a river or an ocean.”