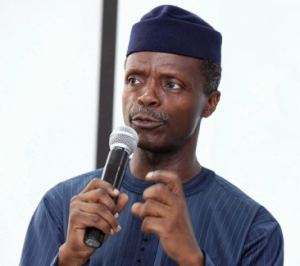 Professor Yemi Osinbajo’s convoy was blocked by a group of Federal Capital Territory(FCT) residents over the alleged takeover of their lands by the military.

He was said to be on his way to the airport when he ran into these group of people.

According to his spokesman, Laolu Akande, who shared the video through his Twitter handle, he said Osinbajo got down from the car and met with the people.

He added that the vice president promised them to look into the matter with a view to finding an amicable solution to their problems. Pure class isn’t it???

On his way to the airport just now, VP Osinbajo runs into a group of FCT residents protesting alleged land takeover bid by the military. He gets down, engages the people, proposing to meet with their leaders on the matter & intervene with a view to finding an amicable solution pic.twitter.com/wMIAVL7I3c