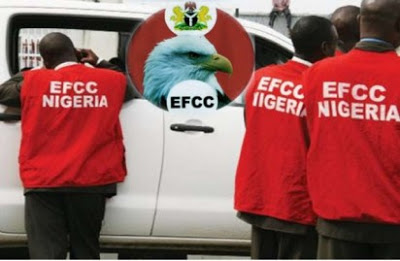 The Economic and Financial Crimes Commission(EFCC) has dissociated itself from a group extorting Nigerians in its name in highbrow areas of Lagos.

According to the anti-graft agency, some men have developed the habit of mounting roadblocks at Victoria Island, Lekki and Festac Town areas of Lagos — extorting money from alleged internet fraudsters using its name.

In a statement by the agency on Wednesday, the EFCC said it’s not part if it’s practice to mount roadblocks — adding that the EFCC operates with standard global practice.

The attention of the EFCC has been drawn to activities of some unscrupulous elements, who mount roadblocks at highbrow areas of Lagos – Victoria Island, Lekki and Festac Town, parading themselves as EFCC operatives to extort money from alleged internet fraudsters.

For the avoidance of doubt, it is not part of the EFCC’s operational practice to mount roadblocks, neither does it engage any agent(s) to do so on its behalf. EFCC operatives stick to standard procedures, which conform with the global best practices.