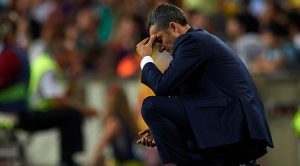 Barcelona was unable to capitalize on their three goals advantage during their visit to Anfield home of Liverpool in the UEFA champions league semi-final second leg.

The Reds beat the Spanish champions by four un-replied goals to take the aggregate score to 4-3 making it the second successive year Barcelona would throw away a three goals margin.

Some even went as far as saying the coach has been hiding under Messi’s influence and it only came to light after the Argentine was below his usual best during the tie.

Valverde has been stealing a living on Messi’s ability. The other day he brought him on to defeat what was it Levante or Getafe? To win the league.

Valverde won two straight league titles but this club is too big for him, at least in Europe. Losing is one thing but losing in two straight seasons the way he did is unacceptable. I tweeted this before, I'll tweet it again. He never shows confidence.

he better sack valverde by tomorrow morning. i can’t keep up with this every damn year