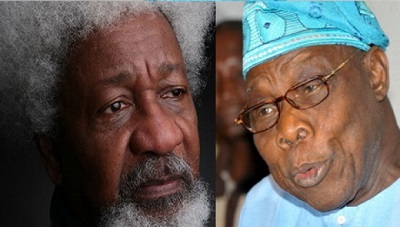 Some Nigerians have taken to Twitter to react to a recent endorsement by renowned Nobel Laureate, Wole Soyinka on a comment made by former President Olusegun Obasanjo on the rising insecurity in the country.

Obasanjo speaking recently in Delta state had linked ethnoreligious motive to Boko Haram and Islamic State’s West Africa Province activities — Which definitely earned him some backlash from some members of the President Muhammadu Buhari led government.

However speaking yesterday at an event organised in Lagos by the United Bank for Africa (UBA) to commemorate the 2019 Africa Day, Soyinka had advised the federal government not to ignore the comment of the former President Boko Haram and Herdsmen.

He said: “This country is descending into a horrendous abyss, the like of which have not been witnessed in this country.” The Nobel laureate said he read the Minister of Information and Culture, Alhaji Lai Mohammed’s response to Obasanjo’s comments and noticed that the minister was focusing largely on the language used by the former President and not the substance of what he said.

“We should not be too abrasive in our assessment of Obasanjo’s comment, but we should analyse it and focus on the substance,” Soyinka stated.

“I believe our unity is possible even with the plethora of languages,” he said.

“We just have to understand what the purpose of that unity is. Priorities exist, but the picture of Africa together is one we must keep in view, but not forget the issues militating against it.

“I wish to plead that we particularize the sense of unity. Let’s prioritize the material condition of our people. Right now, we are being recolonized by some internal forces.”

Soyinka and Obasanjo have been known for a long time to disagree on everything — and this may perhaps be the very time, the Nobel laureate would agree with the ex-president on anything.

This according to some Nigerians shows that there is, in fact, such a thing as “Fulanisation” and Nigerians must wake up.

He said the issues raised by Obasanjo should be taken seriously, and not dismissed.

Soyinka and Obasanjo agree on an issue for the first time in recorded history. Fulanisation is REAL. WAKE UP, SOUTHERNERS!

Lord have mercy. For the first time, Prof.Soyinka & Dr.Obj are agreeing. The world must be coming to an end.

If Obasanjo and Soyinka can agree on a matter for the first time in my lifetime, who am I not to agree with Buharists sometimes. Life Na beans abeg! Meanwhile, “Islamization and Fulanization” agenda may just be real o! Who knows?