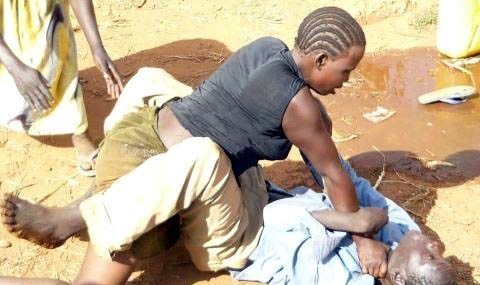 New reports confirm the alleged attack of a Zimbabwe man by his wife for daring to interrupt her sex session with her alleged lovers. The husband allegedly caught her in bed with the men.

The man identified as Tinei Muchena was shocked when he walked into his home and caught his wife pants down with two men in their matrimonial bed.

Not bothered about what had happened, the wife still went on to stab him.

B-Metro, reports that the news surfaced after Nelia Ndlovu was hauled to court by her husband for allegedly assaulting him.

The court heard that on 29 April 2019, Muchena got home at around 8 pm and found two males seated on his bed. He went to ask what they were doing in his bedroom naked and sitting on his bed.

Ndlovu, his wife, however, got really angry with her husband for entering without knocking. A fight broke out causing Ndlovu to bring out a knife and stab Muchena on the right hand.