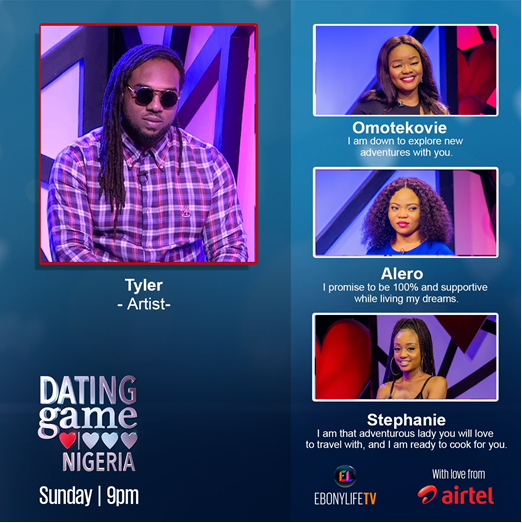 The 13th episode of the Dating game Nigeria brought to you by Airtel was one hell over a fun packed episode.

It looked like Airtel saved the best for the last, leaving us feeling like the show should have gone on and on.

Chigurl was her usual funny self and the contestants were so interesting to listen to.

All the contestants were so fine and had the perfect response to the questions thrown at them. They gave the one picking a tough time because even us viewers, found it a tad difficult to eliminate any of the contestants based on their answers.

Let’s talk about the first batch of contestants

So the girls definitely brought their A-game with their answers. However, Tyler (such a hunk by the way) asked questions that were quite engaging and easy to relate with.

When asked about “cooking at home or eating out”, the girls sort of gave very predictable answers but Contestant number 3, Stephanie totally won it from there.

She said she would cook for him then dress up and go out with him because she loves to “dress up and go somewhere”. Frankly, which woman doesn’t like to do both for her man?

That was where she won it over Kovie and Alero — Plus her job as a project manager for an oil company may have been an advantage especially since Tyler is an architect. We hope they take it up from here, they really looked good together.

Let’s also talk about the second batch of contestants 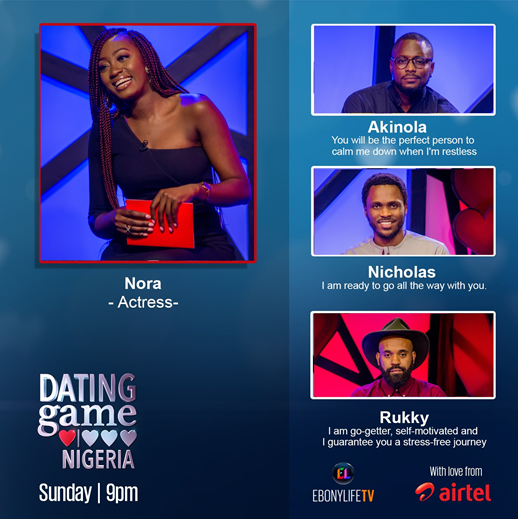 These ones put the icing on the cake. Nora sounded really intelligent and a fun person to be with. The way she easily played with words and to forget how beautiful she is made her and the show even more captivating.

And the guys didn’t disappoint either. Her questions were good enough to make the men reveal a good part of themselves.

It was totally difficult to predict who the winner for her will be and when she eventually picked contestants number 3, for a split second you could see the disappointment on the faces of the other two guys – even though they had not physically seen her, she had the energy to snatch your attention with her words.

Her choice for Mr Risky as she quickly nicknamed him, may not be far from the fact that he too, just like he has a way around words.

And when she said he looked “mysterious”, she took the words right out of our mouth. You know that sort of mystery that draws you close to a person, just to find out more about them and keep wanting more? Yeah, that kind!

The show was good and was definitely worth the while. Airtel must make good their promise to bring back another season because they already got us hooked.

Grab this opportunity to win some amazing gifts. Simply answer the trivia questions on the #DatingGameNigeria and win smartphones or a trip to Dubai with your loved one. This trivia is open every Sunday from 8 pm to 7 pm the following Sunday. #LoveAirtel #EbonyLifeTV.

TRIVIA FOR THE WEEK:

Which movie is a popular romantic movie?

A. Men in black

SMS: N20 The more you play, the higher your chances of winning ”