Nollywood actress, Cossy Orjiakor, has warned her colleague, Uche Ogbodo to be careful of the friends she keeps, firing shot at another actress, Halima Abubakar.

Uche Ogbodo had posted a picture of herself and friends, Halima Abubakar and Uche Elendu, saying she rolls with them because they keep it real.

However, reacting to the post-Cossy Orjiakor queried her fellow actress about the true identity of her friends. She accepted that Uche Elendu is really dope, but called Halima Abubakar a snake.

Uche Ogbodo deleted the comment, but not backing down, Cossy reacted.

As u can see I no mention the green snake name but those yrs in the industry during those my dog palava… one used to be my friend …….. hahahahaha no worries this rat wey sabi bite dey blow air she is sweet ooo but when that envy of jealousy get into her ur own na bye bye. If u delete this message again I go carry ur picture go my page go advice u. As u see me so I no send anyone even u sef I stand for the truth sweets 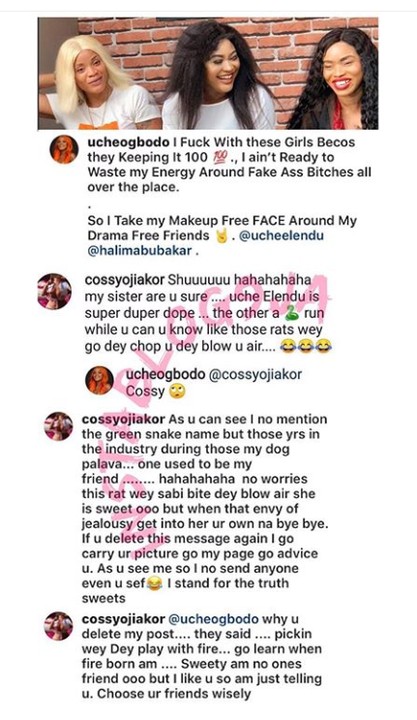