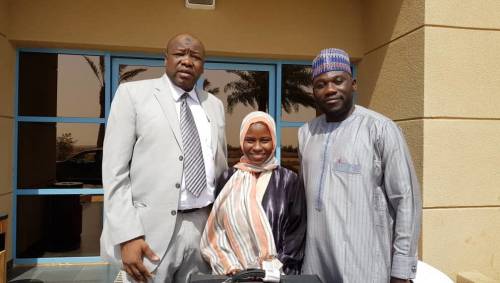 A few days ago, social media was abuzz with the news of a certain young lady Zainab Aliyu and one other Nigerian, who were arrested in Saudi Arabia on drug charges.

Geoffrey Onyeama, the Minister of Foreign Affairs, speaking on the release of both Nigerians said it followed a well-planned and coordinated process.

Via a statement issued by Friday Akpan, the ministry’s acting spokesperson, he said;

“It will be recalled that Miss Zainab Habibu Aliyu was arrested by Saudi security officials on Wednesday, 26th December 2018, in a Hotel in Medina.

“This was following the discovery at the airport of a bag containing illicit drugs purportedly bearing a tag with her name.

“Another passenger, unrelated to Zainab and who was travelling on the same aircraft, was also arrested on the same day as Zainab. He is Ibrahim Abubakar.

“On receipt of the information on the arrest of the two Nigerians, the Nigerian Consulate in Jeddah intervened and requested for full investigation to ascertain the innocence of Zainab Aliyu and Ibrahim Abubakar.

“Investigations conducted by the Airport Authorities and National Drug Law Enforcement Agency (NDLEA) in Kano discovered a drug cartel at the Mallam Aminu Kano International Airport (MAKIA), Kano, that specialises in planting illicit drugs on innocent travellers without their knowledge.

“It was also discovered that the bag tagged in Zainab’s name was planted by the cartel without her knowledge.

“Following the arrest of members of the cartel, the Federal Government is currently prosecuting the suspects in the Federal High Court, Kano.

“The outcome of the investigation and subsequent trial of the suspects confirmed the innocence of the two Nigerians.

“The Consulate General of Nigeria in Jeddah, upon instruction from headquarters, therefore sent series of Diplomatic Notes to the Saudi Foreign Ministry, informing of the arrest of members of the syndicate in Kano and forwarding the report of the NDLEA investigation and court proceeding.

“These documents were forwarded to the Consulate in Jeddah to further support the innocence of the two Nigerians and also resolve the issue of luggage tag numbers.

“Following these efforts, officials in the Consulate secured an appointment and met with the Director General of the Saudi Foreign Ministry, Jeddah Branch, and requested him to forward the NDLEA report to all concerned Saudi agencies with a view to releasing Zainab Aliyu and Ibrahim Abubakar.

“All these processes followed were consistent with the usual diplomatic channel of engagement. To maintain the diplomatic pressure, another note was sent by our Embassy in Riyadh conveying the same message to the Saudi authorities.

“On Friday, 26 April, 2019, a note was also sent to both the Saudi Embassy in Abuja and its Consulate in Kano, forwarding court documents relating to the trial of members of the Kano syndicate.

“Thereafter, the Legal Adviser of the Saudi Foreign Ministry confirmed that relevant agencies and departments in Saudi Arabia were going to meet to consider all the Notes Verbale and reports submitted by Nigeria in order to facilitate early resolution of the case of Zainab Aliyu and Ibrahim Abubakar.

“While all these efforts were ongoing, Mr. Habib Aliyu, the father of Zainab appealed to the Federal Government of Nigeria, the Saudi authorities,the international community, as well as well-meaning individuals to intervene in his daughter’s case and save the ‘innocent’ lady from possible execution.”

On the peculiarities of the case, the statement continued: “It should be noted that the resolution of this case required the convergence of the diplomatic process and the judicial procedure, leveraging on President Muhammadu Buhari’s goodwill and international standing.

“The judicial/legal process in Nigeria provided the critical documentation that aided the diplomatic efforts to establish the innocence of both Zainab Aliyu and Ibrahim Abubakar.

“More so, it must be emphasised that the intervention by President Muhammadu Buhari directing that all efforts be exerted to secure the release of the two Nigerians facilitated the expedited final favourable resolution of the matter.

“Fortunately, these silent diplomatic efforts in the past few weeks culminated in the release of Zainab Aliyu on Tuesday, 30 April, 2019, and Ibrahim Abubakar on Wednesday, 1 May, 2019.”