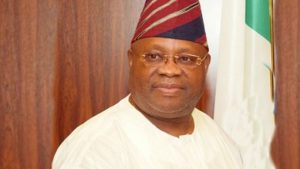 Senator Ademola Adeleke, the Peoples Democratic Party(PDP) governorship candidate during the 2018 Osun State election has been detained at the force headquarters, Abuja.

The Police spokesman, Frank Mba, who confirmed the arrest said he was arrested because of alleged certificate forgery and testimonial forgery.

He made this known via a statement he released after the arrest.

“We alert the public, diplomatic and democracy community worldwide that the Nigerian Police has arrested and detained Senator Ademola Adeleke on old trumped up charges of certificate and testimonial forgery,” the statement read.

“This is after the school principal and school authority have through affidavits denied any forgery and owned up to the school testimonial issued to Senator Adeleke.