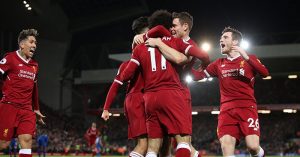 English champions, Liverpool, have knocked Barcelona out of the UEFA Champions league after overturning a three goals deficit at Anfield stadium today.

The Reds scored three goals in the second half after opening the scoring within the first 10 minutes of play. Netherland International, Georginio Wijnaldum was the hero of the day as his two goals ensured parity between the two sides.

As a result of his brace after coming on in the second half, he is now the first substitute to score twice in a Champions League match for Liverpool since Ryan Babel against Besiktas in 2007. He’s also the first ever sub to score twice against Barcelona in the competition. Amazing isn’t it???