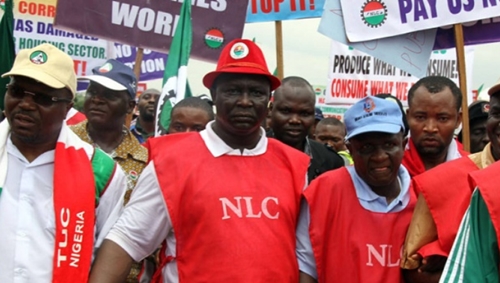 The Nigeria Labour Congress (NLC) has declared that a national strike in Abuja on Monday because of its issues with Chris Ngige, minister of labour and employment.

The NLC also directed its members in all the countries of the world to embarrass the minister as well as members of his family, wherever they are seen.

The NLC has had a back and forth with the minister over an alleged exclusion of a member of the Nigeria Social Insurance Trust Fund (NSITF) from the board.

Speaking with journalists after a central working committee meeting on Thursday, President of the NLC, Ayuba Wabba, said Ngige is not fit to be minister

He said: “He is not fit to be a minister. He has no reason to be called the minister of labour. He is a lord of his own and therefore instead of protecting us, he is against us. Therefore we have nothing to do with him under the circumstance,” he said.

“NLC has sent messages to all workers in the 163 countries who are members of the ITUC to embarrass the minister and members of his family anywhere they are seen, especially at airports where workers operate.

“The real reason he is opposed to Chief Kokori was that the veteran labour leader cannot be compromised. Since the minister has been talking about the issue of corruption in the NSITF, the government should put in place a judicial commission of enquiry to investigate the agency so as to unravel who the actual corrupt persons are.

“So, we are demanding that the Board, headed by Kokori, be inaugurated and all the thugs who attacked us in the full glare of security agents be investigated and prosecuted.

“The CWC decided to embark on a national protest on Monday, May 13, in Abuja against the brutalisation of its members during the peaceful protest.

“As minister of labour, he knows that there is a clear provision of the law on picketing, lockouts and even strike action and therefore for him to have instead of addressing the issues, descended so low to the extent of using thugs to attack workers who were on a peaceful conduct of the protest, is something that is less than desirable and is anti-workers.”