Home Entertainment ”Only a spiritual IMBECILE will support the RAPE of women irrespective of...
Facebook
Twitter
WhatsApp 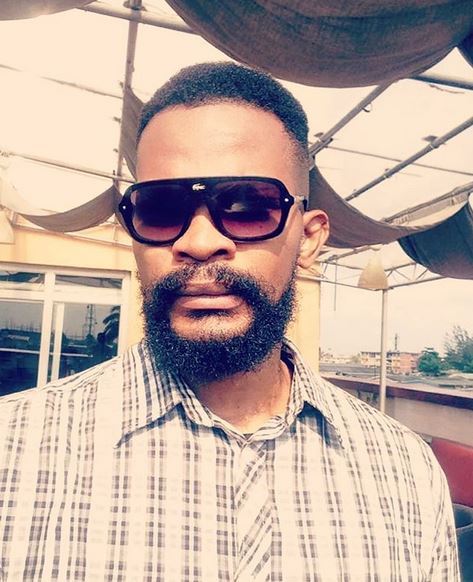 Controversial Nollywood actor, Uche Maduagwu, has fired heavy shots at a colleague, Okon Lagos, for defending the police officers who raped the commercial sex workers arrested in Abuja some weeks ago.

According to Uche who spoke via his Instagram page, it is only a spiritual Imbecile that will support the RAPE of women irrespective of their occupation.

@okonlagos Only a spiritual IMBECILE will allegedly support the RAPE of women irrespective of their occupation…🍎🍎 @okonlagos excuse me, sir, do you think any woman will voluntarily go into “prostitution” in Nigeria if she is economically vibrant?💰 So my brother, “na condition make crayfish bend”,😀 thus, its tomfoolery and disgraceful for anyone to allegedly say, because “Ashawo no get pride and dignity”… Being allegedly RAPED by Policemen is ok,😭 that’s the most disgusting and loathly statement ever.✏ Must everything be a JOKE in Naija? @okonlagos the DIGNITY of a woman is never tied to her deviant LIFESTYLE choices,👗 or her MODE of economic SURVIVAL preference, no, that’s an erroneous conclusion,🍚 because the dignity of any human being is based on his/her fundamental human right which he/she enjoys as a CITIZEN of a particular country.🌎 Even God is against RAPE, in Deuteronomy 22:25 “But if a man finds a betrothed damsel in the field, and the man force her, and lie with her: then the man only that lay with her shall die”.✏ @okonlagos Every “commercial sex worker” in Nigeria is “betrothed” to their “economic quest for survival”, so anyone who allegedly “RAPE” them has committed a CRIME against God, humanity and the LAW 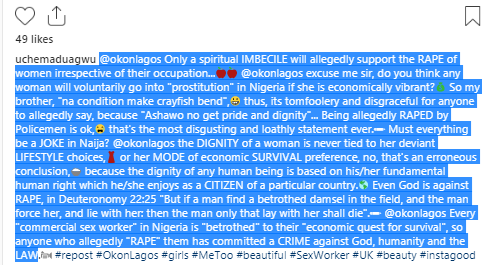