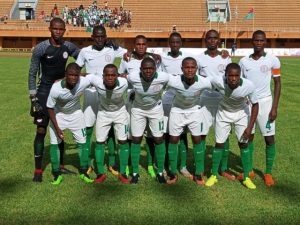 Nigerians have taken to their Twitter handles to express disappointments following the defeat of the U20 Flying Eagles at the hands of the USA U20 National team in the ongoing FIFA World cup tournament holding in Poland.

The Flying Eagles started the campaign by beating Qatar and knowing that a draw would almost ensure their passage to the next round of the competition, they still went on to lose by two goals to nil against the Americans.

Consequently, Nigerians while reacting have lashed at the team for the lack of cohesion in the final third which ultimately prevented them from scoring a single goal.

Lowkey the Nigerian boys don't want to beat the US team so that they won't deny them VISA #usanga pic.twitter.com/8ZAj7xz85T