The woman who is said to be a housewife to Suleiman Habiba welcomed a conjoined twin through a Caesarean section at a General hospital in Ningi about a week ago. 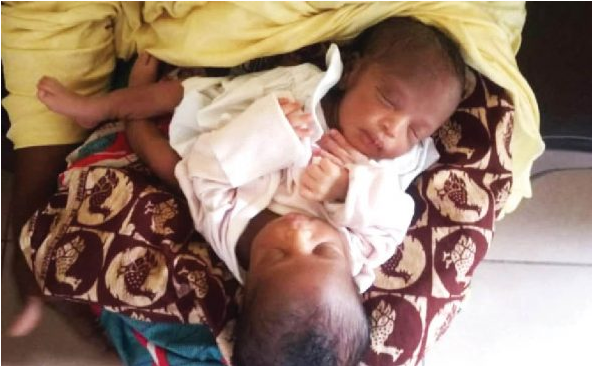 “When a scan was conducted, it showed that they were lying in a position that will not allow their passage through the birth canal so we recommended a CS to remove them. In the course of the operation we discovered that they are conjoined twins. They are healthy but they have only one stomach, four arms, and three legs. So their physiology is very delicate,” he said

The father of the twins in an interview said :

The mother and children are healthy, however, she lacks breast milk to feed the twins so they are being fed with baby food, he also said the Emir of Ningi gave them some money to buy food for the twins. The father, who was visibly agitated, said

“I have been seeing pictures of conjoined twins on the internet and on television, but I have never thought of how their families cope until now. Alhamdulillahi, their birth is a trial from Allah and only He knows how their live s will be. I thank him for his mercies”