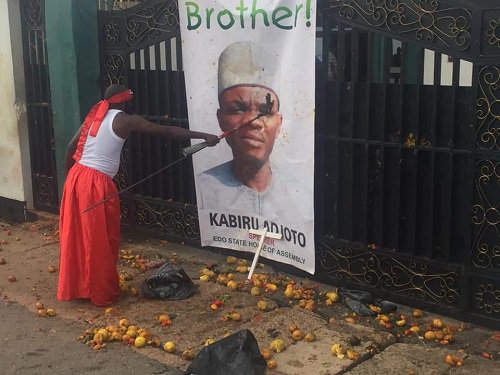 Protesters have marched to the Edo State House of Assembly over a bill seeking to criminalize electricity theft which was newly passed by the state’s legislator.

Although the state Governor, Godwin Obaseki, is yet to assent the new bill, protesters were spotted marching to the fate of the state’s Assembly with an obituary of the state’s speaker, Kabiru Adjoto.

The Speaker while fielding questions from journalists after the protesters had left said there is more to the protest than the issue of the bill. He further speculated that the protest was sponsored by some of his political enemies.

“The relevant laws will be applied to make the civil society proved that we collected money. The onus is for them to make proof available to the courts.

“There is more to it than electricity theft. They brought herbalist to be invoking incantations on my picture.”