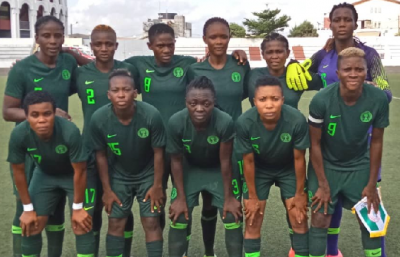 The Super Falcons of Nigeria trashed Niger 15-0 to progress, with ease, into the WAFU Women’s Cup semi-final and in the process surpassed their previous biggest win.

Nigeria led by two goals after two minutes of play and at the interval, the scoreline stood at 9-0.

The super falcons previous biggest win was when they beat Sierra Leone by 12 goals, 25 years ago.

Six more goals in the second half secured a semi-final spot in the tournament, scoring the highest number of goals in a single match in Women’s football on the continent.