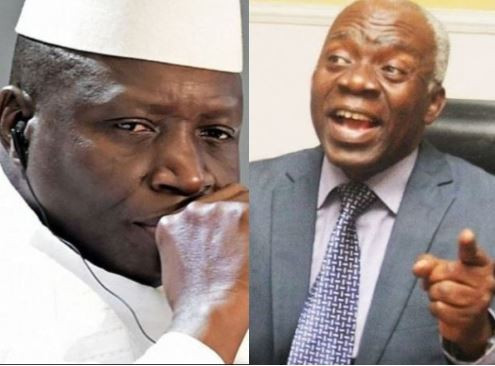 Femi Falana is alleging that back 2005 former President Yahya Jammeh of Gambia, ordered the illegal execution over fifty persons to include 9 Nigerian in his country.

According to a statement on Thursday, the Human Rights lawyer stated that on July 21, 2005, the Gambian Navy seized a boat conveying 58 immigrants. The immigrants consisted of 9 Nigerians, 40 Ghanaians, 3 Senegalese, 3 Sierra Leoneans and 2 Togolese., who were all planning to stowaway to Europe.

Falana continued saying two Ghanaian nationals were released to a Ghanaian Government Delegation, while another Ghanaian escaped but the remaining 55 immigrants were murdered on the orders of the “brutal regime of Mr Yayah Jameh, former President of Gambia”.

”In the investigation conducted by our law firm into the killings, it has been established that the 9 Nigerians involved were travelling with their passports. However, the Nigerian Community in Senegal confirmed the identity of one of the massacred Nigerian immigrants. The details are:-

Mr Falana, while appreciating the Minister of Foreign Affairs, Mr. Geoffrey Onyeama for helping him with vital information in the investigation, stated that the family members of the 9 Nigerians that were murdered have an opportunity to seek redress in the Truth, Reconciliation and Reparations Commission sitting in Gambia.