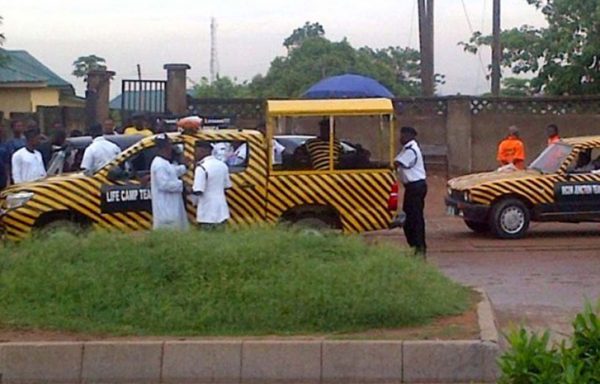 There was pandemonium in Presco-Ezza road, Abakaliki, as some officials of the Vehicle Inspection Officer(VIO) pushed an elderly man to death over the argument as regards his vehicle particular.
Reacting to the incidence, the governor of the state, David Umahi,  has called for the arrest and prosecution of the VIO officials. He equally released a statement where he described the death of the man as ”Callous.”
Statement below:

“The Governor on hearing about the death of Chief Mgbada expressed great sadness and ordered the Commissioner of Police to arrest and prosecute the suspects who paraded themselves as VIO Officials.
‘Let it be known that the Governor in a town-hall meeting with Ebonyians proscribed all task-force agents working under any guise using the state government as cover.
“In the proscription order, the Governor also dissolved all revenue and tax agents in the state at all levels with a promise to convoke another town hall meeting where a new tax and other revenue will be deliberated and agreed upon and the Governor is yet to convene this meeting before this ugly incident.
“The Governor is saddened by this careless death and wishes to dissociate the state government from the illegal activities of the VIO and other task force agents in the state and directs for immediate arrest and prosecution of such illegal tax or revenue agents.“