Popular Ghanian actor, Chris Attoh has departed a film set for the United States after his newly wedded wife, Betty Jennifer was murdered.

According to reports, Betty Jennifer was shot dead while leaving her office in Maryland in the United States of America.

She was shot in the head by the shooter on Friday evening around 5 pm and was pronounced dead when police got to the scene of the crime.

Police described the suspect as “a black male with a thick build and black hair, wearing a dark shirt and pants.”

Chris Attoh recently got married to Betty Jennifer in a secret wedding after leaving his ex-wife and Nollywood star, Damilola Adegbite. 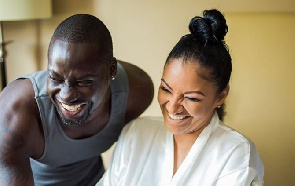