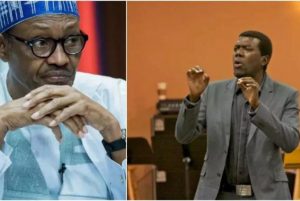 Reno Omokri, a former aide to ex-president Goodluck Ebele Jonathan has lampooned President Muhammadu Buhari for making a joke about the Inspector General of Police’s weight while fielding questions on the strategy the country has adopted in the combat against insecurity especially kidnapping happening in the country.

The president was quoted as saying he has not seen the Inspector General of Police, Adamu Mohammed but the IGP is losing weight, so he thinks he(IGP) is working hard.

Reno Omokri while reacting to Buhari’s comment queried why the president would tie the IGP’s performance around his weight.

We are in the month of Ramadan. Is President @MBuhari expecting the @PoliceNG IG, a practicing Muslim, to gain weight during Ramadan? God forbid, but what if he is sick and that is why he is losing weight? What kind of boss determines your performance by your weight? #RenosDarts