Home Entertainment “Why Davido Would Have Gone Into Depression If Not For His Girlfriend,...
Facebook
Twitter
WhatsApp 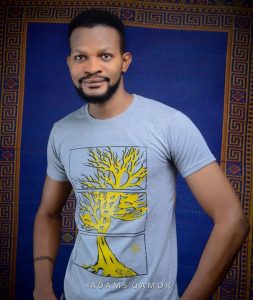 Controversial Nollywood actor, Uche Maduagwu, has come out to state that popular singer, Davido, would have gone into depression if not for his girlfriend, Chioma Avril.

Uche who spoke through his Instagram page said the amazing singer, Davido, has his girlfriend, Chioma, to thank for her continuous prayers because ”there are so many haters in the entertainment industry”, he added.

@davidoofficial would have gone into DEPRESSION if not for thechefchi…🚐🚐 Let me state categorically here that as far as Nigerian MUSIC is concerned, @davidoofficial is the KING of contemporary music…👑 He does not only run the street of Island, but everywhere on the MAINLAND, no other name has the street credibility of @davidoofficial,🔥 but if not for my baby sister, @thechefchi DAVID would have gone into depression mode because of too many HATERS in the music industry.🍎 @davidoofficialshould always be thankful to this beautiful JEWEL called CHIOMA,💎 because if not for her PRAYER, and LOVE, where will @davidoofficial be today emotionally?🍚 Dear haters, I’ve already gotten the attention of @chrissyteigen,✈an A-List American CELEBRITY, so I’m already the biggest in Nollywood,🎬 but it would be so unfair if I don’t take out time to celebrate @thechefchi She is indeed, a DIAMOND in a very gentle rough. 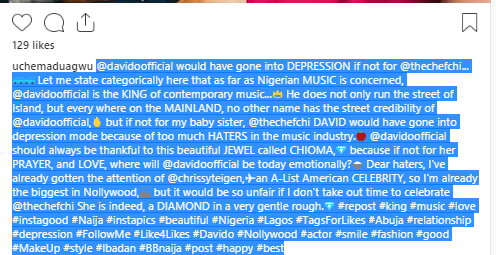